View source
watch 01:36
We're Getting Mutants in the MCU - The Loop
Do you like this video?
Play Sound

The episodes of the D.Gray-man anime are based on the manga series by Katsura Hoshino.

The plot of the episodes follows the adventures of Allen Walker, an exorcist whom wields the power of "Innocence" in order to fight against The Millennium Earl; an ancient sorcerer seeking to destroy the world with monsters called akuma.

The episodes began airing on October 3rd, 2006 in Japan on TV Tokyo. The first season of the anime, known as the "1st stage", aired for 51 episodes, finishing its run on September 25th, 2007. The second season, known as the "2nd stage", began airing on October 2nd, 2007, and finished its run on September 30th, 2008, lasting 52 episodes. The English adaptation of the series has been licensed by Funimation, and the first season of the anime is set to air in the beginning of 2009.

The next thirteen episodes were released on June 23rd, 2009, and released on Blu-ray on January 5th, 2010. Because of licensing issues between Funimation and Dentsu and TMS Entertainment regarding the second half of the 2006 series, Funimation was unable to start releasing the second half in North America until October 10th, 2017, as "Season 3, Part 1", where it contained episodes 52-64.

D.Gray-man Hallow was announced during the Jump Festa 2016 event. It was first confirmed as a D.Gray-man anime title and that the airdates in Japan was set to be in 2016. During the Anime Expo, the staff revealed the title and announced that the anime will be released in July 2016. The anime episodes will be produced by TMS Entertainment, the studio that produced episodes of the first and second season of the D.Gray-man animation that were aired from 2006 until 2008. On the official twitter account of the D.Gray-man anime, it aired from July 4, 2016 to september 26, 2016. The 13 episodes were later dubbed in English language by Funnimation. A DVD and Blue-Ray Release was intended but it was paused and cancelled for an indefinite amount of time "for various reasons" as of March 1, 2017. [1] [2]

The two anime adapt the manga chapters with a certain closeness while adding some moments, filler scenes, filler arcs, changing or removing some parts. The first D.Gray-man anime (2006 anime) ends with the last scenes adapting the night 157 (skipping most of pages 1 to 14 of this chapter). The second anime, D.Gray-man Hallow starts with the night 165 and ends with Night 208 (skipping page 22 to 29 of this chapter). 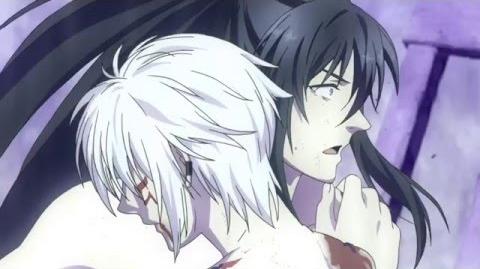