The European Branch (or simply Headquarters (本部, Honbu)), is one of the seven branches of the Black Order as well as the main branch, overseen by Branch Chief and Chief Officer Komui Lee and Chief Assistant Bridget Faye.

The European Branch follows the traditional organization that all branches of the Black Order follow, with a Branch Chief and Chief Assistant overseeing general operation and seven subdivisions functioning concurrently. In addition, though, because it is the main branch, Branch Chief Komui Lee also acts as the Chief Officer, and can give orders to the other six branches.

After the Level 4 Akuma laid waste to their former headquarters, the European Branch was relocated to a far less conspicuous-looking building in Southern Europe.[1]

The site contains a church, priests' apartments, a medical wing, training grounds, a lodging house, large baths, administrative block, and a recreation building. Outside the walls which surround the site, there is a dense forest, which separates it from the urban area.[1]

This building was made to look after the welfare of the members of the Order, allowing them to train and get medical treatment. The inside structure of the building is almost symmetrical, and contains 4 floors, and 2 basement levels.[1]

The top floor is an attic storeroom.[1]

The 3rd and 2nd floors both have the same structure, and contain two types of hospital rooms: individual, private quarters, and larger communal wards. Both floors also have two linen closets under the stairwells at both ends. While these closets are in the same position on each floor, the set up of the hospital rooms differs.[1]

The 1st floor has a training room, as well as locker rooms and shower rooms (both of which are separated by gender). It also houses the Order's medical facilities, such as medical examination and operating rooms, which take up left side of the floor.[1]

Both basement levels are spacious training rooms where Order members can work out and train hard.[1]

There is a large water fountain on the plaza outside the buiding, where members of the Order often relax. The plaza is also used as a place to go go for a run.[1]

The lodging house has 7 floors as well as a basement level. It is a huge building which can accommodate roughly 400 people.[2]

The top floor is an attic storeroom.[2]

The 6th floor contains private rooms which are for Generals and VIP guests.[2]

The 5th floor has rooms which are shared between 2-4 people, which are for Finders.[2]

Floors 4 - 2 have rooms which are shared between 2-4 people, which are for Exorcists and high-ranking personnel. Floors 2 and 3 also have bay windows, whereas every floor above them does not. The 4th floor is exclusively for women.[2]

The 1st floor is made up of 4-to-a-room dormitories, which are for ordinary, rank-and-file staff. Like floors 2 and 3, this floor has bay windows.[2]

On the left side of the basement is the personal effects vault—a room where things related to deceased members of the Order are stored, having never been returned to their families. On the right side, there are large baths and changing rooms, which are separated by gender.[2]

An office building used by each group within the Order. Important meetings are also held in the meeting room within the building.[3]

There is often a strange smoke that rises from this floor, as the members of the Science Division work hard and tirelessly on their research. Also, there is a monument of The Gatekeeper, who was in charge of guarding the entrance to the old headquarters. It is rumored that strange things began happening the night they put it on display.[3]

This is the room where Komui carries out his work. Just like his office in the previous headquarters, the floor is covered in paperwork, leaving no place to stand.[3]

The church is a place to prayer for fallen allies. It was built at the center of headquarters as ordered by the Pope. Just like the old headquarters, it is very likely that funerals will be held in this church. Behind the church there are the priests' apartments.[3]

Within the basement is a secure dungeon where rebels are placed. It is where Allen was detained for concealing the whereabouts of the Second Exorcists.[4]

When arrested, inmates will have their feet tied together with iron chains, and in some cases, a “CROW” amulet may be used to restrain them further.[4]

Inspectors from Central are free to come and go as they please.[4]

An area where Order members can restore their energy and spirits. It has a library with large windows and sofas, as well as a lounge where everyone likes to gather. The building has 6 floors and a basement.[5]

The top floor is an attic storeroom.[5]

The 1st Floor contains a recreation room, bar, sunroom, kitchen, and a cafeteria. There is also a passageway to another staff dormitory.[5]

The basement is a storeroom.[5]

The site is surrounded by a dense forest and deep ocean.

The main entrance to headquarters is a small, hollowed out inlet in the seaward side of the cliff, which can be reached by boat. Since the general public cannot know the location of the Black Order headquarters, this entrance is rarely used. The other entrance is one that goes through the forest.[6]

The old Ark that was successfully taken from The Millennium Earl is submerged beneath the sea near headquarters, and is now used as a means of transportation.[6] 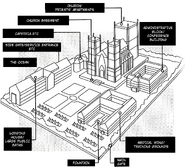 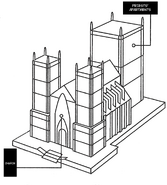 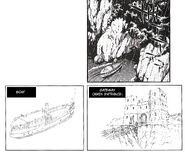 Gateways into the Order

The Ark is submerged into the ocean outside the Order