Active
Finders (, Faindā?) are group of volunteers working for Black Order who traverse the world, studying abnormal phenomena and determining the possible locations of shards of Innocence. They are the only Black Order field officers who do not use Innocence. Finders are part of the Intelligence section.

When information, collected by the various branches of the Black Order and sent to the European Branch Headquarters for analysis, seems to indicate the possible involvement of Innocence in located instances of paranormal activity, Finders are dispatched to determine the exact cause of the anomalies. If they suspect/determine Innocence is involved, they contact Headquarters and attempt to secure said Innocence. If they run into issues, namely with Akuma, they call for Exorcist backup.

The most distinct part of their uniform is the long, cream-colored, hooded jackets they wear, which are lined with zippers on the left and the right breast.[1] Other than that, they seem to wear little else or whatever they choose underneath.

After the move to the new Headquarters location, the Finders uniforms underwent an upgrade alongside the uniforms of the other Black Order personnel; the jackets now bear a sleeker design and are now shorter, ending at mid-thigh. They no longer bear hoods, instead having marks of rank on the left breast and flapped pockets instead of zippers.[2][3]

When deployed in groups for investigation or retrieval missions, finders are organized in units. Each unit seems to be led by a unit captain who gives his name to the unit.

There are a few known times units of finders have been deployed in consequen numbers:

Several Finders are seen carrying large, metal boxes on their backs which they wear using straps, much like a backpack. These boxes have a corded telephone receiver on the back, and do not seem to require any external connection to make calls to the Black Order.

Recently, the backpacks seem to have been replaced with smaller, lighter cloth sling bags, though whether or not they bear the same built-in telephone features as the old backpacks is yet to be seen.[6]

Talismans, seen in several forms (including but not limited to lamps, round shields and heavy duty ballistic shields), are devices that work using unknown mechanisms to form cubed barriers of light that block/contain Akuma. Use is not indefinite; talismans run on battery power that will run out after extended use.[7] 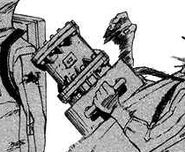