Volume 19, Inner cover
Gamako (ガマ子, Gamako) is the pet frog of Wisely Kamelot. It was already presumably with him when he was homeless, and has most notably appeared in omakes featuring Wisely.

Gamako is a frog about half the size of a human head. It is green and has numerous spots of another shade of green all over its body.

When Wisely is introduced to the Kamelot family by the Earl, Gamako is sitting on Wisely's head.[1] It was then adopted in the Kamelot Residence, to the great displeasure of Sheril Kamelot. [2] 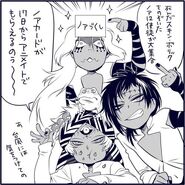 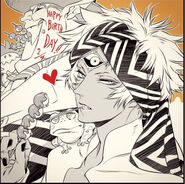