The World of D-Gray Man is full of technological devices designed for many purposes. Most of them are the result of the Black Order's research, specifically the scientific section.

Main article: Golem
Golems are small, often portable, multi-purpose devices, typically featuring communication abilities. The creation of some of them seem to be both thanks to Technology and Magic.

Robots are talking, often human-like artificial devices. They are charged with typical tasks by their masters and are able to function by themselves.

Some liquids or gases may have particular, or even unexpected effects serving diverse uses.

Prehensile, portable technologies which need to be effectively used by someone. 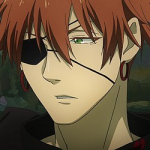